Cooking oil is a necessity in restaurants, but many establishments are not disposing of their used cooking oil in the best way – by recycling it. 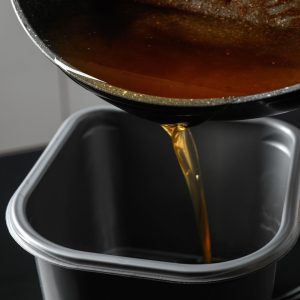 Most things in the environment can be recycled, from paper to metal to glass. Just as paper, aluminum, and glass can be reused, so can cooking oil. It does not take any effort to recycle it. Although it is gross and used, used cooking oil is in fact an easy way that the U.S. restaurant sector can help the environment and their bottom line.

Why You Should Be Recycling Used Cooking Oil

Reduce Your Restaurant’s Carbon Footprint- Your carbon footprint is the number of greenhouse gases you release both directly and indirectly. Recycling is a good way to reduce your carbon footprint by redirecting valuable materials for other uses, rather than sending them to a landfill. Although it may seem that one restaurant recycling its used cooking oil will never solve the greenhouse gas issue, it is an important first step toward that goal.

Prevent Plumbing Problems And Costly Repairs-In a busy kitchen, pouring used cooking oil down the drain might seem the easiest solution. Eventually, it will take you a whole lot longer to pay for restaurant plumbing repairs, and that could have a detrimental impact on your restaurant s productivity.

Make The Most Out Of Your Cooking Oil-Before it ever reaches your kitchen, cooking oil contributes to disastrous dangers of the environment, as it is produced. Overall food production accounts for one-quarter of the world s greenhouse gas emissions – and cooking oil places a substantial burden on the world s agricultural industry. Vegetable oil ingredients are often grown on large farms as monocultures, meaning a seed is grown on the same land year after year. This practice depletes nutrients from the soil, forcing farmers to use synthetic fertilizers and other chemicals to keep up with demand. Cooking oil that applies only to one purpose is a lot more wasteful compared to cooking oil that becomes valuable throughout its lifespan.

Support The Growing Oil Recycling Industry-Recycling acts as a critical tool for influencing the effect of greenhouse gas emissions, but we ought to bolster the recycling business. Companies that specialize in cooking oil recycling – for example, Millstadt Rendering – can specialize in efficiently collecting, transporting, and processing used cooking oil so it can be recycled. Supporting these businesses allows the cooking oil recycling industry to expand, improve their technology, and create new jobs.